Perhaps the Largest Selection of Liturgical Texts in the World

Loome Theological Booksellers presents our largest selection of liturgical texts for sale . . . ever.
Posted by Christopher Hagen at 3:25 PM No comments: 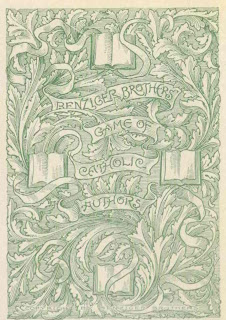 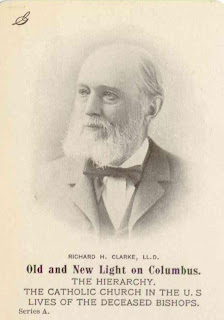 Loome carries a plethora of Benziger Brothers texts, but this is the first time we've carried a Benziger Brothers game. We've never heard of the Benziger Brothers Game of Catholic Authors, nor can we find any information on it, but we're intrigued. Perhaps we have an entire set of the playing cards hidden among the books in our stacks. Hope springs eternal.
Posted by Cathryn at 1:13 PM No comments:

Once upon a time a library was where one could expect to find real books. By real books I mean those objects that contain printed pages bound between covers. However, while libraries rush to embrace the electronic screened word, WIRED published an article about how the king of the screened word, Google, is making way for more real books. That's good news for real bookstores.
The video about Northshire Bookstore's use of the Espresso Book Machine demonstrates how real books will always require real bookstores (or at least real bookish places), of which we have two: Loome Theological Booksellers and Chestnut Street Books wherein one will find thousands of real books, whether from the private libraries of scholars, pastors, and priests or from an Espresso Book Machine (maybe in a couple years . . . maybe), for many years to come.
Posted by Christopher Hagen at 10:49 AM No comments:

Avast, thar be pirates among the tomes! 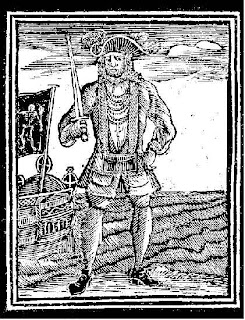 Ahoy, me hearties! In celebration of International Talk Like a Pirate Day, Loome Theological Booksellers be keepin' an eye out for pirates.

Ye might think there be no such piratical tomes at Ye Olde Theological Bookseller, but pirates be masters of sneaking and skullduggery.

We found Whisperings of the Caribbean lurking in the Missionary Studies. It be the account of the bonny missionary Joseph J. Williams. He devotes the very first chapter to the Caribbean buccaneers.

Captain Hickeringill, writing in 1661, speaks of the Bucaneers, "who live by killing the wild beeves for their hides; and might grow rich by the trade, did not their lavish rioting in the experience, at the neighbouring Tortudoes (Tortugas) exceed the hardship of their incomes. Their comfort is, they can never be broke whilst they have a dog and a gun; both which, are more industriously tended than themselves.

Scurvy pirates be lurking elsewhere at Loome. We found them skulking in the following tomes: 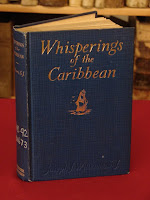 The Works of Robert Louis Stevenson (Including South Sea Tales and In the South Seas)
The Waverly Novels by Sir Walter Scott (Including The Pirate)
History of the Catholic Church in Jamaica by Francis J. Osborne, S.J.
Apostle of Brazil: The Biography of Padre José de Anchieta, S.J. (1534-1597) by Helen Dominian

Symposium on the Isle of Kalymnos

Just in case you missed it . . . This Bibliosite below fell out of a book I cataloged this week. 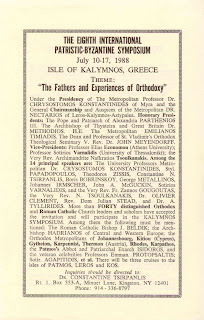 Bibliosite [bib-lee-oh-sahyt] - noun: Seemingly lifeless ephemera that falls out of its host (the book) when leafed through or dangled upside down, often pointless, sometimes very interesting.
Posted by Christopher Hagen at 2:23 PM No comments:

From Buzz and the Misfits:

"Piers Paul Read's recent novel, The Death of a Pope, received mixed reviews from our Misfits. Although Joseph Pearce called it "a faith-driven theological thriller", we decided it wasn't much of a "thriller" and that it had few believable moments that placed you anywhere near the edge of your seat. Many non-Catholics who read the novel will assume that it is anti-Catholic as the author identifies every modern challenge facing the Church(condoms for HIV victims in Africa, female priests, abortion, birth control, etc., etc.) to build his story. Regrettably, the anti-Catholic issues raised in the novel are not directly confronted or refuted. The only character in the story who might have applied some "apologetics" to the issues is Father Luke Scott. However, his tepid defense of Church doctrine did little to confront or give balance to the secular, modernist views of his niece, Kate Ramsey. As one of our Misfits remarked, Read's Father Scott was certainly not a priest that invited comparison to G. K. Chesterton's Father Brown. In fact, we wished there had been a bit more of Father Brown's character in Father Scott.

We also found Read's laicized anti-hero, Juan Uriarte, to be a very thin character. Uriarte's early experience in El Salvador is briefly described in the novel and used to set up the violence he is planning against the Church. The character, Uriarte, actually expresses Read's disillusionment with liberation theology and what he terms "social" Catholicism. In a recent interview with Ignatius Press, Read explained:

"When I was young I was a zealous exponent of liberation theology. As I grew older I like to think I grew wiser and came to see how 'social' Catholicism, however superficially appealing in the face of the suffering caused by poverty and injustice, in fact falsifies the teaching of the Gospels. This is particularly true when it condones or even advocates the use of violence. Yet this was precisely the message preached from the pulpits in Catholic parishes and taught in Catholic schools in the last decades of the 20th century. The two visions of what charity demands of a Christian confront one another on the issue of the Aids epidemic in . It is this confrontation that gave me the idea for my novel."

That said, we do not believe the idea for the novel was fulfilled in The Death of a Pope.

And now to the future--our October book is Manalive by G. K. Chesterton. This is another of Chesterton's classic novels. "In this long-hidden yet highly entertaining classic, author G.K. Chesterton shows readers, through the delightful story of a windy evening with the mysterious Mr. Innocent Smith, the soul-refreshing secret of the love of life itself." Most avid readers remember the opening sentence of many of the novels they have read. Chesterton's opening sentence in Manalive is wonderfully poetic and memorable. The story begins with, "A wind sprang high in the west, like a wave of unreasonable happiness, and tore eastward across England, trailing with it the frosty scent of forests and the cold intoxication of the sea."

There is another reason why we are reading Manalive at this time. It will help prepare us for viewing the movie Misfit Ahlquist and crew have been busy filming! A trailer for the movie is now on YouTube at http://www.youtube.com/watch?v=6ZbJeHAFOSk . I will let you know as soon as there is information on a release date.

Manalive is available [in the Collected Works of G.K. Chesterton edition from Loome Theological Booksellers].

Finally, our book for November and December is The Stripping of the Altars: Traditional Religion in England 1400-1580 by Eamon Duffy. This monumental book by Duffy, is "a work of daring revision and a masterpiece of historical imagination...(that) utterly transforms the misinformation and propaganda that still surrounds the late-medieval English Church". In the process, it patiently and systematically destroys the untruths created by reformation and enlightenment scholars and authors.

And in conclusion, I do welcome any comments on our reviews, books, or selections for the future.

Posted by Christopher Hagen at 1:32 PM No comments:

"Sucks to your ass-mar," Cultural Literacy! 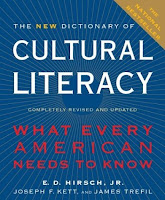 The New York Times recently ran an article titled "A New Assignment: Pick Books You Like." It examined an educational approach known as the reading workshop:

For years Lorrie McNeill loved teaching To Kill a Mockingbird, the Harper Lee classic that many Americans regard as a literary rite of passage.

But last fall, for the first time in 15 years, Ms. McNeill, 42, did not assign Mockingbird — or any novel. Instead she turned over all the decisions about which books to read to the students in her seventh- and eighth-grade English classes at Jonesboro Middle School in this south Atlanta suburb.

The results were predictable. Some students wallowed in young adult chick lit. A few challenged themselves with authors like Ernest J. Gaines and Toni Morrison.

Minnesota Public Radio waded into the fray this week on the show Midmorning. One of their guests was Nancie Atwell, a junior high English teacher and the author of The Reading Zone: How to Help Kids Become Skilled, Passionate, Habitual, Critical Readers.

Atwell is a proponent of fostering a love of reading by allowing students to choose their own books. She argued children need to practice reading voraciously before they can enjoy the classics. They need to build up fluency, stamina, confidence and taste before they can tackle Jane Eyre.

Atwell gave the example of one of her female students. Initially, the girl chose to read Twilight by Stephanie Meyer. Throughout the year, Atwell nudged the student toward increasingly difficult books. By the end of the academic year, she had read 40 books. When the student looked back on the Twilight series, she commented to Atwell that those books paled stylistically in comparison to her two favorites: A Tree Grows in Brooklyn and The Poisonwood Bible.

Yet questions about the reading workshop remain. Are you sacrificing cultural literacy? Are you sacrificing the shared experience of a class studying a common text? Who will be left to shout "Sucks to your ass-mar!" on the playground if no teacher has assigned Lord of the Flies?

After indulging in a little navel-gazing, I can see a similar situation played out in my own reading history. As a teenager, I devoured young adult fiction such as The Enchanted Forest Chronicles and Harry Potter. It wasn't until high school and then college that I started reading literary classics for pleasure. I may have developed my love reading by consuming lighter fare, but I needed something to nudge me toward more substantive reading. In fact, the first literary classic I loved was Fahrenheit 451--assigned to me in sophomore English class.
Posted by Cathryn at 4:58 PM 4 comments:

Reading Rainbow, a 26-year stalwart on PBS, came to an end last week. NPR ran a fitting obituary citing the cause of Reading Rainbow's demise:

"The series resonates with so many people," says John Grant, who is in charge of content at WNED Buffalo, Reading Rainbow's home station...

Grant says the funding crunch is partially to blame, but the decision to end Reading Rainbow can also be traced to a shift in the philosophy of educational television programming. The change started with the Department of Education under the Bush administration, he explains, which wanted to see a much heavier focus on the basic tools of reading — like phonics and spelling.

The Department of Education wants children's television to focus on a noble and worthy purpose--how to read. Yet there are numerous children's shows on television that already do this--Sesame Street, Blues Clues, Wordworld, etc.

Reading Rainbow focused on fostering a love of reading--why kids should read. It had found its niche purpose. This was evident from the show's fanciful title sequence and imaginative opening song. (See video above.)

Butterfly in the sky, I can go twice as high,
Take a look, it's in a book — Reading Rainbow ...

Try getting that song out of your head. Three of Loome's staff members were born the same year Reading Rainbow debuted on the air. We grew up with the adventures of host LeVar Burton and book reviews given by bibliophilic children.

We must trust the love of reading will come just as naturally without LeVar Burton to guide the way, but it's a shame to say farewell to a show that fostered that nascent love in children. As Scout Finch, the heroine of To Kill a Mockingbird said, "Until I feared I would lose it, I never loved to read."
Posted by Cathryn at 10:16 AM 5 comments: