No Abstinence Today Baby! It's the Solemnity of the Annunciation! 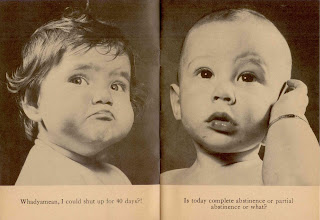 The True Spirit of Lent - Counting the Costs and Cutting Corners 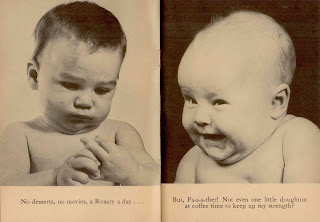 Dear Misfits,
Well, what to say about Count Dracula and his vampiric pursuits?  Some liked the novel and some dismissed it.  Misfits Olson and Kriesel were staunch defenders of Bram Stoker and his account of the Count maintaining that it was a good read.  It was also a unique novel of mystery and horror in that it marked the beginning of a genre that lasts to the present day.

Misfits Druffner and Loome were somewhat dismissive.  They did not think the novel rose to the level of our other books and that it’s theology was weak and off the mark for Catholics.  The Olson/Kriesel Camp maintained that this was a strength of the novel in that it contrasted basic Catholic theology with that of a misguided Protestant understanding of the Church.  Plus, the novel itself was permeated by a Catholic aesthetic, even if it’s catechesis was often exaggerated or bordering on superstition.
The other Misfits present were somewhere in between as befits the generally democratic discussions experienced in our meetings.  The middle ground was perhaps best expressed by Misfit Blondin: “Dracula is an amazing piece of popular culture, but in the end superficial as far as addressing moral issues from a Catholic perspective.  I think Stoker uses Catholicism as a literary device and he is successful only because most readers are not educated about Catholic theology and thought.”
Misfit Blondin also brought his son to our meeting.  He wished to let all of the Misfits  know the reaction of his teenage son to the discussion:  “I want to thank everyone who attended the Wednesday March 9th meeting for the excellent example you showed to my son on what it means to be Catholic and a gentleman.  You guys are wonderfully counter-cultural. Thanks for helping me be a dad.”  I agree with Carl.  We are counter-cultural and always gentlemen...even when disagreeing.  That trait is to be especially valued in the divisive age we seem to live in.
Now to the future:
We are excited about our upcoming literary journey.  We are beginning the Divine Comedy...and unlike millions of other men (and women) who have begun this daunting allegory, we will finish it!  We will accompany Dante on his journey, guided by the poet Virgil, as he plunges to the very depths of Hell and embarks on his arduous journey towards God.  We will use Dorothy L. Sayers “landmark translation” of the Divine Comedy.  It is arguably the best translation given her monumental intellect and the scholarship she brings to the task.  We have also chosen the Sayers translation in the hopes that all who accompany us on our literary journey will have a common reference for discussion and comment.
And always remember that we meet on the Second Wednesday of every month in the St. Thomas More Library at the Church of St. Michael at 7:00 pm.  Our meetings last until 8:30 pm.  Therefore start reading The Divine Comedy and mark your calendar for 7:00 pm,  Wednesday, April 15, 2011.
With warmest regards,
Misfit Buzz
Share |
Posted by Christopher Hagen at 1:42 PM No comments: Links to this post 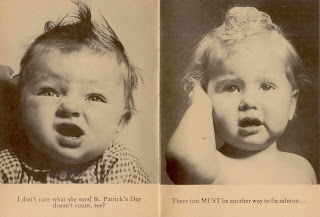 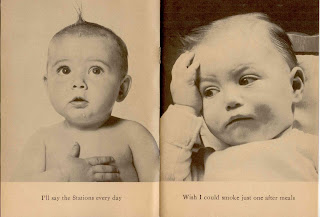 That is One Heavy Smudge 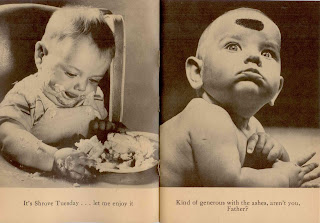 Another Baby for Lent 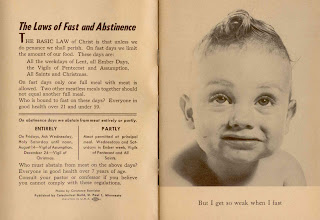 I discovered a wacky bibliosite yesterday, just in time for Lent. 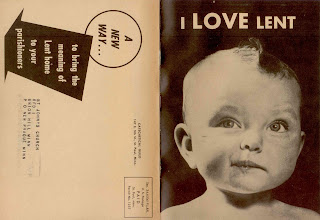 Just wait until you see more of what's in this pamphlet.  I'll be posting more babies over the coming weeks.
Share |
Posted by Christopher Hagen at 9:41 AM No comments: Links to this post

Why walking into our bookstore is more dangerous than virtually doing so.

A good Loome friend recently passed along this quote by Chesterton about the danger of bookshops:

It is perfectly obvious that the most respectable book-shop in the world must contain an enormous proportion of rubbish, negative or positive; of reading that is a waste of time when it is not a weakening of character; trashy rediscoveries of divine truth; cracked and crabbed continuations of hole-and-corner controversies; erotic and egotistical rants by forgotten imitators of Byron and Swinburne; blatant social panaceas and solutions of the problems of World Peace and the Gold Standard; stupid biographies of respectable people and silly autobiographies of disrespectable people. All this gas and poison is stored up on a bookshelf and in a book-shop; but this only makes the bookshop as dangerous as all the other shops. [GKC ILN Nov 24 1928 CW34:634]

I would rather like to think of our bookstore as a dangerous place to visit and browse (however I think it might be the danger of a sort different from what Chesterton means).  There aren't all that many dangerous places for respectable people to visit anymore (excepting the library and a church with the Blessed Sacrament) and some danger in one's life helps to remind him of being alive.
What do our readers think is particularly dangerous about Loome Theological Booksellers in person?

Here’s Another Reason Not to Watch Television

The following was originally published in the Catholic Servant newspaper.  Mr. Dale Ahlquist, the author, has graciously agreed to its being posted below.  Loome Theological Booksellers encourages all to check out more of what Mr. Ahlquist has to say at the American Chesterton Society.  And now, another reason not to watch television:

At the end of my life, when I look back, I suspect that my biggest regrets will not be all the many sins I have committed, but rather all the hours I wasted watching TV. Fortunately, these days I hardly ever watch it. Not only have I made the startling discovery that my actual life is far more interesting and that my children are far more entertaining than anything on television, but I also have found it necessary to avoid the dangers of channel-surfing and stumbling upon some ugly mug in a wing-backed chair carrying on about an obscure English writer.
However, I have not yet achieved complete purity. Over the past few years, I have watched two or three television series (on DVD). So as not to give scandal, or free publicity, I won’t mention their names. Besides, they are problematic. While I have enjoyed the communal experience of hooting and hollering at the set with my wife and others while these ongoing tele-tales have unfolded, I have also noted that our reactions have been as perplexed as they have been pleasurable.
I understand as much as anyone the importance and artistic value of car chases and large explosions, but I cannot escape the notion that these elaborately presented thrills might not be serving a higher purpose. In the increasingly high-tech battles between the good guys and the bad guys, it is still pretty obvious that the bad guys are really bad, but it is less apparent that the good guys are really that good, except for the fact that they’re against the really bad guys. But it is hard to get excited when it is not clear what is being defended.
The confusion in these light entertainments of murder and mayhem are a sign of a slightly more profound problem: moral relativism. A few days before Christmas, Pope Benedict compared the times we live in to the fall of the Roman Empire. What do these two declining civilizations have in common? “The disintegration of the key principles of law and of the fundamental moral attitudes underpinning them.” The moral consensus, said the Holy Father, is collapsing. Without it, our society cannot function. Nor can it be defended.
G.K. Chesterton saw it coming over eighty years ago. Besides seeing the early signs of a New Dark Ages in the political, economic and social chaos of the modern world, he also pointed out how the pointlessness of modern art was a telling indicator of societal decay. We’re not talking about paint splatters on canvas, but about what was supposed to be taken as serious literature. Chesterton says that a detective story may not be considered intellectual, but at least there is some moral sense to it. There is a plan, there is a purpose, there is a problem, and there is a solution. It goes somewhere. But the so-called “serious novelist,” says Chesterton, “asks a question that he does not answer; often that he is really incompetent to answer.”
In the meantime, the serious literature folks make fun of the old sentimental novel that always ended happily to the sound of wedding bells, which incidentally, ring in a church. And yet, says Chesterton, “judged by the highest standards of heroic or great literature, like the Greek tragedies or the great epics,” the old sentimental novel is was really far superior to the modern novel. “It set itself to reach a certain goal - the marriage of two persons, with all its really vital culmination in the founding of a family and a vow to God; and all other incidents were interesting because they pointed to a consummation.”
But the modern narrative has avoided both the religious vow and the romantic hope. The characters are “minutely described as experiencing one idiotic passion after another, passions which they themselves recognise as idiotic, and which even their own wretched philosophy forbids them to regard as steps towards any end.” The old sentimental novel may have been  simplified and conventional, but there was a real prize to be won: marriage. It was something fruitful. 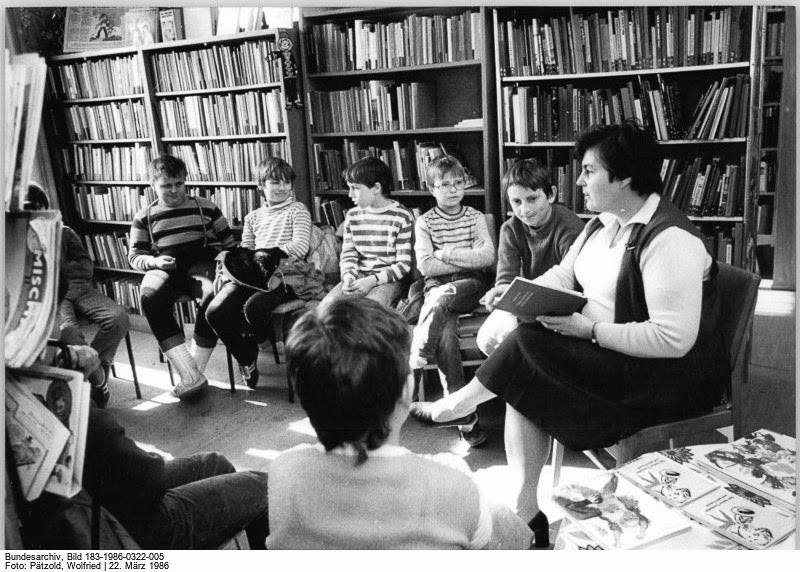 Chesterton admits that marriage may not be the only goal in life, but the problem with the modern novels is that they seem to deny that there is any goal. “They cannot point to the human happiness which the romantics associated with gaining the prize. They cannot point to the heavenly happiness which the religious associated with keeping the vow. They are driven back entirely on the microscopic description of these aimless appetites in themselves….In short, the old literature, both great and trivial, was built on the idea that there is a purpose in life, even if it is not always completed in this life; and it really was interesting to follow the stages of such a purpose; from the meeting to the wedding, from the wedding to the bells, and from the bells to the church. But modern philosophy has taken the life out of modern fiction. It is simply dissolving into separate fragments and then into formlessness.”
What Chesterton says of modern literature is also true of television entertainment. There may be an urgency to it, and passion, but no life, because there is no coherent philosophy. It has dissolved into separate fragments, or rather, exploded into separate fragments. There is no moral cohesion because there is no moral consensus, so nothing holds together. The result is not only bad, it’s boring.