The Presence of God Under the Gazebo

Last Wednesday evening, The Misfits met at Claret Farms under the Gazebo to discuss and recite the remarkable faith-centered poetry of Denise Levertov.   It was a beautiful evening with each of us reciting a poem...and then sitting in silence to reflect and consider the profound depth of Levertov's deeply spiritual poetry.  It is difficult to describe the spiritual ethos of the men at the meeting other than to say that we felt we were in the presence of God.  If you haven't read The Stream & the Sapphire: Selected Poems on Religious Themes, you really should do so.  You will read and experience poems that are like prayers. 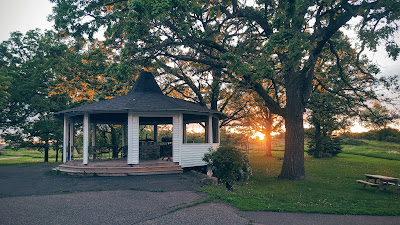 And now to our next book: for September, we will read A Handful of Dust by Evelyn Waugh.  In what many consider his greatest novel, Waugh creates a savage satire of modern Britain.  "Tony Last (presumably the last of his tribe) is a member of Britain's declining landed gentry.  He's barely managed to hold the family estate together but he has a successful marriage (or so he believes) and a wonderful son.  Then, in short order, the boy is killed in a horse riding accident, his wife leaves him for a callow youth and Tony travels to the Amazon on an ill-fated expedition.  In the end, Tony finds himself stranded in the jungle with a reclusive Englishman who makes him read the works of Dickens aloud."

"From the wife who casually abandons her marriage, to the member of Parliament whose greatest achievement is a new regulation on pork bellies to the similarities Tony finds between the civilized British and the Amazon savages, Waugh depicts a Britain that is sunk in amorality and has abandoned all pretense of greatness.  Long before WWII brought down the final curtain on the Empire, he presents a despairing portrait of a society bereft of any moral bearings.  The final image, of the decent Englishman reciting the greatest of England's cultural achievements into the wilderness, is an especially poignant metaphor for what Waugh felt his country had been reduced to in the Modern age."

Our book for October and November is A Tale of Two Cities by Charles Dickens.  The Misfits have long considered reading this novel...and now we will.  "The novel is set in London and Paris before and during the French Revolution. It depicts the plight of the French peasantry demoralized by the French aristocracy in the years leading up to the revolution, the corresponding brutality demonstrated by the revolutionaries toward the former aristocrats in the early years of the revolution, and many unflattering social parallels with life in London during the same period. It follows the lives of several characters through these events. A Tale of Two Cities was published in weekly installments from April 1859 to November 1859 in Dickens's new literary periodical titled "All the Year Round".

The novel is widely available and can be downloaded and read at The Project Gutenberg web site: http://www.gutenberg.org/files/98/98-h/98-h.htm#link2H_4_0001

The Misfits want to thank Chris Hagen for hosting our Summer meetings at Loome Theological Booksellers/Claret Farm.  We had three wonderful summer meetings under the Gazebo and intend to continue that tradition next summer if allowed by our host.

Our meetings will now be held in the St. Thomas More Library at the Church of St. Michael in Stillwater.  Our meetings are always held on the second Wednesday of the month and begin at 7:00 pm and end at 8:30 pm.  Our next meeting will be on Wednesday, September 9, 2015

Posted by Christopher Hagen at 5:02 PM No comments: Links to this post