Naturally, Gandalf came to mind when I saw this frontispiece in the book Mémorial Lagrange:
Share |
Posted by Andrew Poole at 2:36 PM 3 comments:

Posted by Christopher Hagen at 10:00 AM No comments:

Dear Misfits,
A bit of catching up is in order:  I've just returned from a one month trip to Europe (Denmark, Norway, Sweden, and France).  Wonderful trip but sad in some respects.  I was amazed by how secular European culture has become.  Evidence of any religious faith is mostly visible in the historic old churches and cathedrals.  Sadly, many are now museums!  It is good to be back and worshiping at the vibrant Churches in our faith-filled St. Croix Valley!
I will begin with a note on the novel we read last month, The Black Robes by Brian Moore.  I missed the meeting on the book but was given an after discussion report.  The Misfits at the meeting generally agreed that it was a somewhat disturbing read with a some uncomfortable and graphic sexual scenes.  The consensus was, see the movie, skip the book.  (The movie by the same title is excellent.)

Now, a few notes on this months book, Frankenstein by Mary Shelley:  the consensus at our meeting was that it is an excellent novel and deserves the title of "classic".  It is difficult to believe that Mary Shelley finished this novel in 1817 when just 19 years old!  That she was able to write such a compelling novel at that tender age speaks volumes about the quality of education in those days, especially an education in the classics.  I am envious!  If anyone has not yet read Frankenstein, to do so now.  You will not be disappointed.  It is also a novel you can recommend to young readers not only because it is a compelling story but also because it is one of the classics of our Western literary tradition.  I should also mention that Misfit Ted Olson graced our evening with a clerihew poem about Shelley (A clerihew is a whimsical, four-line biographical poem invented by Edmund Clerihew Bentley). I quote:
Mary Shelly had a belly
full of wine
when she wrote, Frankenstein.
Ouch!
To the future: For November, will read Dimiter by Willima Blatty.  This is a recently published novel by the author of The Exorcist, which is his most well-known novel largely because of the movie of the same name based on the novel.  Poor Blatty, though he has published many well-received novels and a number of screen plays, he is always referred to as, "the author of the Exorcist".  Maybe Dimiter will change that. I think we are going to like this novel as it has some great reviews and the predominate themes in the book are Catholic . . .
For December, we will read A Christmas Carol by Charles Dickens.  Need I say more?  Perhaps we will take turns reading the story...and have some cookies and egg nog.  Or whatever . . .
Finally, I hope to see you at our next meeting to be held at 7:00 pm, Wednesday,  November 13, The St. Thomas More Library at the Church of St. Michael, in Stillwater, MN.
Your faithful scribe,
Misfit Buzz

Share |
Posted by Christopher Hagen at 11:26 AM No comments:

Archbishop Burke to Discern God's Choice for next Pope - Congratulations! Today Pope Benedict announced that, longtime patron, Archbishop Burke will be made a Cardinal next month.  Loome Theological Booksellers heartily congratulates him on this honor.  We recommend more reading to prepare adequately for his increased responsibility.  Read his humble thoughts on the matter here.

Share |
Posted by Christopher Hagen at 10:58 AM No comments: 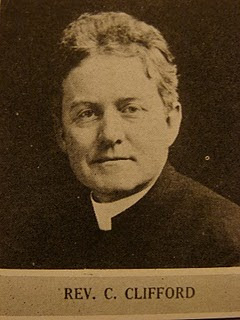 I have mentioned before that semi-fascinating character Cornelius Clifford, sometime S.J., the "American Tyrrell". See first here, then here. A friend recently alerted me to a reference to Clifford by Fr. Martin D'Arcy, published in the book, Laughter and the Love of Friends. Reminiscences of the Distinguished English Priest and Philosopher Martin Cyril D'Arcy, S.J., pp.73-75. Fr. D'Arcy actually mentions Clifford in connection with Tyrrell.

Clifford, as D'Arcy recollects, was a young American and brilliant. The Jesuits sent him off to Belgium for studies, and then he was sent to the English Province where there were at the time men like Tyrrell, Thurston and Hungerford-Pollen. Clifford was delighted to be among men of such intelligence, of his own mettle. He took especially to Tyrrell, who, seeing his ability, "made a disciple of him and used him as a kind of stalking horse to put out his own views". Ultimately this led to trouble for Clifford, who was dismissed from the Jesuits and, when he returned to the U.S., the bishops hardly wanted to deal with him. Eventually he was given a small parish in New Jersey. Through the intervention of some laymen, who recognized his intellectual capabilities, Clifford was given a sort of professorship in medieval theology at Columbia.

D'Arcy met Clifford in 1935 on his own first visit to the U.S. Clifford by then was "this beautiful, rubicund old man with white hair". Clifford, upon meeting D'Arcy, "threw his arms about [him] because [he] was from the English Province" and this brought out all sorts of warm memories. D'Arcy says that in response to Clifford's warmth he (sometime later, I suppose) had caused the commissioning of a painting of Clifford, which was put up at Campion Hall, and yearly there was held a "Cornelius Clifford dinner" as a way of remembering him.

Clifford did visit England again once before he died. Sent over by some friends, he had a marvelous time. D'Arcy comments that Clifford "never wrote anything that [he knows] of, though he was a brilliant man".

Share |
Posted by Andrew Poole at 1:46 PM No comments: