The Turkey and the Turk: Ultra Rare Chesterton!

It is always a joy to acquire particularly rare or interesting items. G.K. Chesterton's The Turkey and the Turk is just one such item. There were 100 copies hand pressed by St. Dominic's Press of Ditchling (of Eric Gill fame), numbered, and signed both by the author and the illustrator (Thomas Derrick). The word on the street is that most of the rest of the edition went up in smoke. Our copy is number 44. It's inscribed on a blank preliminary leaf, "From the Reverend Kevin Scannel [sic] on behalf of The Guild of St. Joseph & St. Dominic to The Catholic Art Association 1959". Msgr. Scannell was a Chesterton expert and possessed a very fine collection of Chestertonian material. 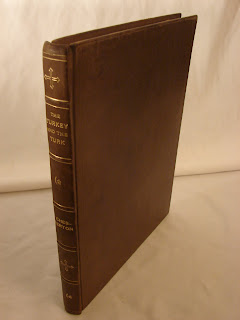 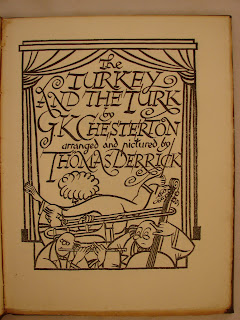 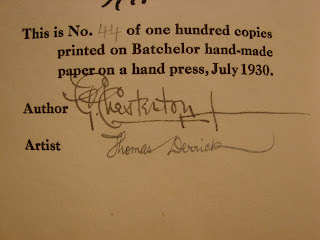 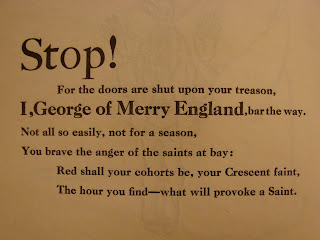 Contact us if you are interested. I cannot say the book is cheap. I also cannot say I wouldn't like to keep it for myself! It really is quite difficult to obtain and quite beautiful. I believe most copies are held by libraries or similar institutions. A few of these libraries possess (hoard) more than one copy, though I doubt they will give one up.

What happens when one of the store's most inconvenient lamps develops a short circuit? Never fear! Bookmen to the rescue! Since the electricians were quoting a grand sum for scaffolding, etc., etc., we decided to become electricians and stuntmen. We pulled the lamp toward the balcony with some rope and managed to reach it with a ladder (somewhat precariously). It was clear what was shorting once the socket was extracted, and this was easily fixed and the socket reinstalled. 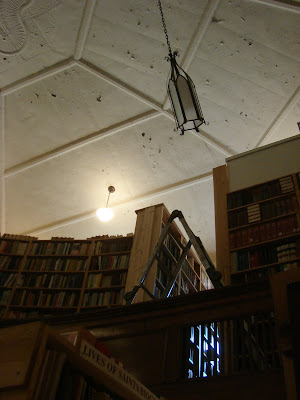 (A shot of the center of the ceiling - rather high up there.) 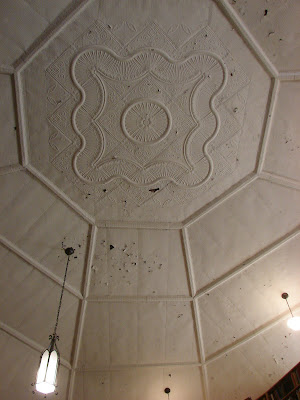 BUT THEN we had to reconnect power to the lamp (previously disconnected to let other lamps function despite the short in this one) up in the great, big, dark, dusty, mildly creepy ATTIC high above the store. 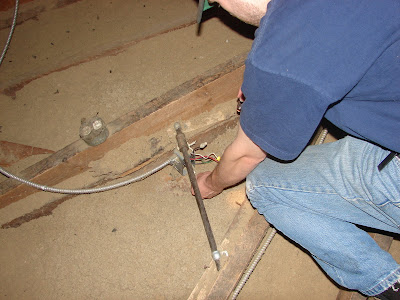 In the attic, the work of early 20th century Swedes is evident. Concerning the structural support over the concave ceiling in the store and the rather steeply pitched roof above it, it almost appears the Swedes made it up as they went along. 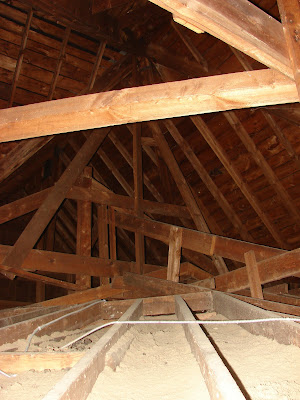 For safety and health reasons, we do not currently offer tours of the attic.
Share
Posted by Andrew Poole at 9:01 AM No comments:

In the last week we were visited by two different sorts of Dominican sisters. In the first photo are two sisters of the Dominican Sisters of St. Cecilia, i.e. the Nashville Dominicans, along with our venerable founder, Dr. Thomas Loome. The congregation will be celebrating their 150th jubilee this summer. Congratulations! I might also point out the college which they operate, Aquinas College. Dominicans, naturally, are very bookish!

Here in Stillwater during the school year we are graced by the presence of several sisters from the same congregation teaching at the local Catholic school. They are a joy to have around. 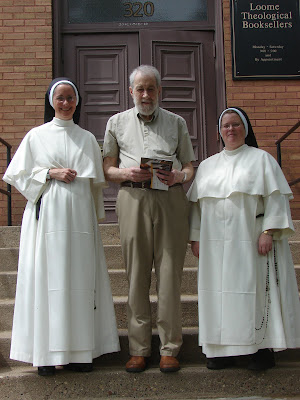 And here's a sister of the Dominican Sisters of Mary, Mother of the Eucharist, based at Ann Arbor, MI. This congregation, which is relatively new, grew out of the Nashville congregation. They also tend to teach and be rather bookish. And like most sisters, they are quite merry. Perhaps that is because serving Our Lord is a joy. Cheers to the sisters! 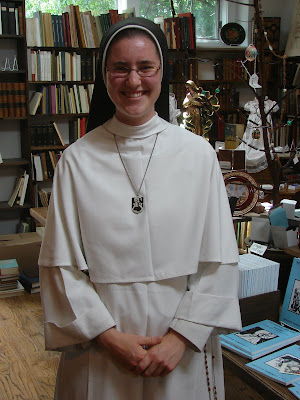 Share
Posted by Andrew Poole at 2:18 PM No comments:

The Brutality of Bookish Folk 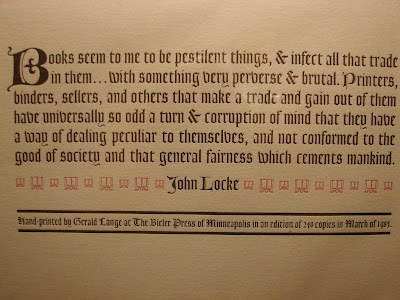 The above is a very finely printed bit on a nice paper. It's been around the store for a long time and I find it amusing always. I think it takes something true about bookish folk (peculiarity) and then drives it too far and accuses the whole lot of corruption. Certainly there are corrupt and unfair bookish types out there, but I should like to think that we at Loome's do in fact act for the good of society... and certainly there are others who do likewise. Of course, Locke is referring to bookish folk in his own day. Perhaps those were brutal bookish days?

Though not explicitly mentioned, I believe librarians would also have to fall into the category of "all that trade in [books]" (just in case some of you thought you didn't qualify for Locke's accusation).

Transcription:
Books seem to me to be pestilent things, & infect all that trade in them... with something very perverse & brutal. Printers, binders, sellers, and others that make a trade and gain out of them have universally so odd a turn & corruption of mind that they have a way of dealing peculiar to themselves, and not conformed to the good of society and that general fairness which cements mankind. -- John Locke

(Hand-printed by Gerald Lange at The Bieler Press of Minneapolis in an edition of 240 copies in March of 1985.)
Posted by Andrew Poole at 6:41 PM No comments:

Ah the amazing power of a bibliosite.

This bibliosite is simply amazing for the fact that the President of the Unitarians, whose ranks are by now often filled with many ex-Catholics, is calling the Catholic Church amazing.

This brings to mind a new song by the award winning folk artist, Peter Mayer.  I love Pete's songs and so do my children.  Most days when they clean up the house in the evening, on goes a Peter Mayer cd.  However, Pete is a former Catholic worship leader who is now a Unitarian and he writes songs from time to time that musically are great, but lyrically are, well, Unitarian.  See the example below from his most recent album, Heaven Below:

All the World is One
You can say that you stand apart
Put a fence around your yard
You can build a tall rampart and guard it with a gun
You can dig yourself a moat
Burn the bridge and burn the boat
It won't matter that much, you know
Because all the world is one, all the world is one

You can march in a big parade
Every Independence Day
You can raise up your own flag and sing your own anthem
It will ring out in the air
With all the other anthems there
Till the winds of the earth declare
All the world is one, all the world is one


Pete writes about how all the world is one but I would offer a corrective to his take on the oneness of the world.  His Unitarian forefather was amazed at the oneness in the Catholic Church.  As much as Unitarians and others sing and preach about the oneness of the world, there is only one human institution that actually brings the world together into peaceful unity.  No other human institution comes close, not any nation state, not the UN, not the Olympics, not the IMF, nothing.  This is in no way saying these other institutions aren't beneficial, but they can't hold a candle to the Catholic Church when it comes to the power to actually unify people from every place on earth.

Actually, the international unity and paradox of the Catholic Church is so amazing that one might be tempted to believe that it is the ONE Holy Catholic and Apostolic Church.
Posted by Christopher Hagen at 12:37 PM 1 comment:

I am blogging from the ACL conference, held this year in St. Paul at Northwestern University. At the last minute we decided to attend, and we're glad we did. For we've been having a good time with the librarians! Is it me, or are librarians always a fun lot of people? 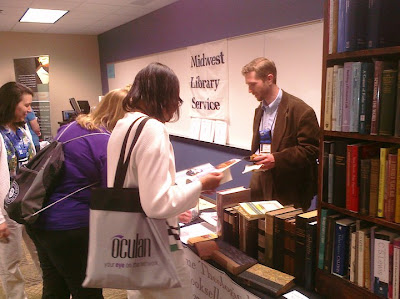 Posted by Christopher Hagen at 11:38 AM No comments:

Here we have a nice set of books on The Life and Times of St. Anselm, Archbishop of Canterbury and Primate of the Britains by Martin Rule... 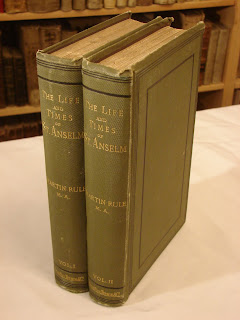 From the library of medieval scholar, Fr. Allen B. Wolter, O.F.M., with his signature... 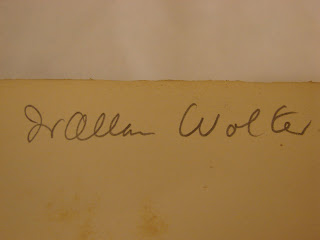 And found in the book (by a nice fellow who was browsing) was an old, German Rentenmark, the currency issued to stop the hyperinflation of 1922-23. The currency was printed and minted from 1923 to 1937. This note dates from 1937; the stamp is dated 1948 (which is the last year during which this currency was valid). 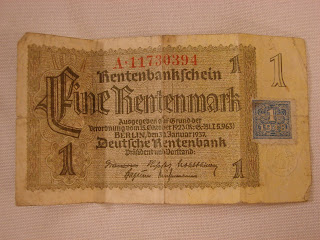 And here's the verso of the note, along with a leaf that was also in the book. Presumably the leaf was placed there by Fr. Wolter. So it's a relic! The Holy Leaf of Wolter! 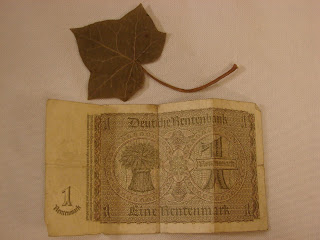 Posted by Andrew Poole at 2:49 PM No comments:

The Meaning of Everything

An enjoyable book: The Meaning of Everything: The Story of the Oxford English Dictionary, by Simon Winchester. It's an easy, quick, entertaining and informative read. I recommend it.

The amazing thing about the OED is the gargatuan size of the undertaking: to define and research the history of every word in the English language, past and present. It is one of the greatest scholarly endeavors ever attempted (let alone substantially finished). 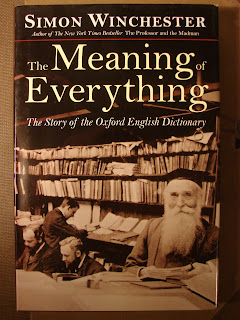 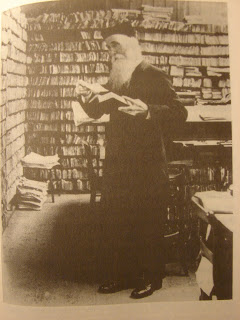 Sir James Murray (pictured here thrice in his Scriptorium, as he dubbed it) was the most significant editor and contributor to the OED in its early days. He even looks like an eccentric scholar!
J.R.R. Tolkien contributed also to the work (amongst many other fine scholars, at least some of whom were rather quirky - another reason The Meaning of Everything is an enjoyable book). Tolkien worked on some words beginning with W, and he was most challenged by the word, Walrus, which turned out to be much older than he had expected. 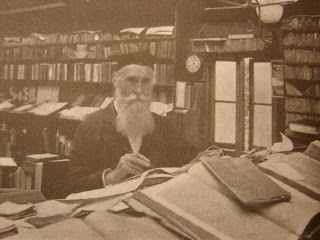