Roman Missal for the Blind

This is one of the more beautiful books I've seen in a bit: a folio, 4th edition (1921) of the Missale Cæcutientium, the Missal for the Blind, i.e. hard of sight. These were made for priests whose eyesight was failing. The firm of Fridericus Pustet was known for fine printing and excellent lithography (as seen here on and facing the title-page). This particular copy is in unused, as new condition! I nearly wept and salivated all over it. It's a gorgeous liturgical book. 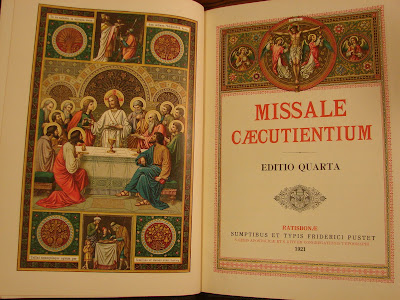 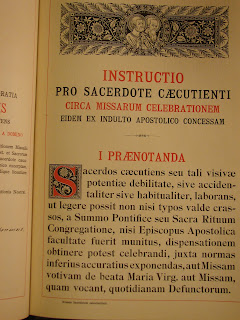 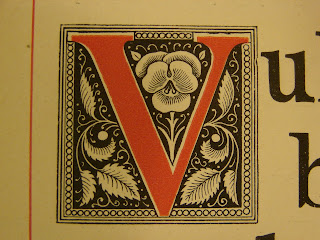 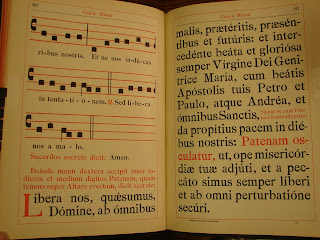 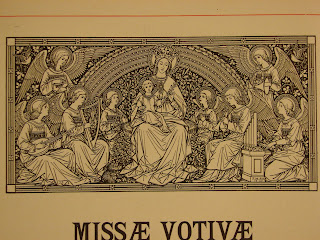 A few other such missals here and here (these not as stunning, but more affordable).
Posted by Andrew Poole at 8:49 PM 6 comments: 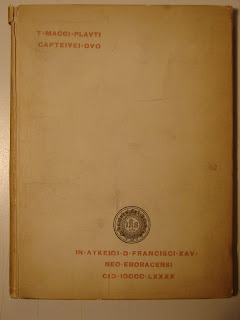 Recall the post about the mysterious Cornelius J. Clifford, S.J., the "American Tyrrell"? Well, he has surfaced again.
In trying to learn about this figure, I had come across reference to a Latin play for which he served as editor while teaching at St. Francis Xavier's in New York as a professor of rhetoric. I hadn't mentioned it in the previous post.
Just a day or two after that posting, I happened upon this book. How uncanny is that! I don't think he published all that much, and this little work is rather rare - it was printed as a guide for the play itself, and constitutes a rare bit of Catholic Americana.
The play is Plautus's "The Two Captives". It was performed in Latin; the book gives the Latin and English on facing pages. 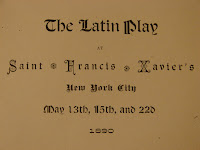 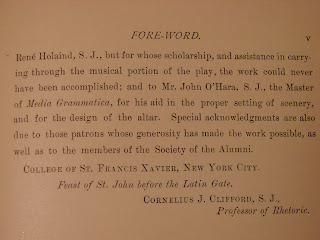 Share |
Posted by Andrew Poole at 6:59 PM No comments: 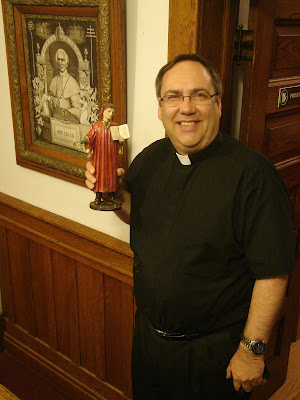 Yes, it was a happy day at Loome Theological Booksellers. Mostly unannounced, but always very welcome, arrived Fr. John Zuhlsdorf, of wdtprs fame. Ready to greet him was the foot-high Dante statue which previously had but taunted him for saying that he was going to come to the store but not really coming (at least not immediately). Now, of course, the two look quite happy together (not to mention the smiling figure in the frame, Leo PP. XIII.). Father took an interest in a good many excellent books, amusing stories were shared... and fun was had by all. See you next time, Fr. Z!

Feast of Our Lady of Mount Carmel

My wife called a bit ago and said she was outside the store, and she asked if I'd come out to get a special treat. What could that be? Did she get me a coffee from The Bikery (nice local bakery, caffe and bicycle shop - I recommend it), or perhaps ice cream in some form or other? No, none of these.

She had made brown scapular brownies to commemorate the Feast of Our Lady of Mount Carmel! How clever! She dropped off a few at the store, but was on her way to the Carmelite monastery to give a bunch to the cloistered sisters. Is that a Catholic nerd thing to do or what? For our non-Catholic patrons out there: I am sorry if this seems incomprehensible. For a detailed article on what the scapular is, see here. 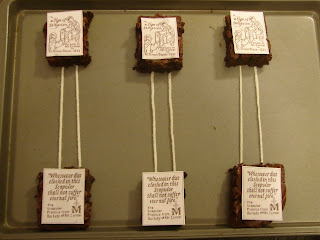 I came accidentally upon this book today by a Mrs. Oliphant. Ha! That's great! 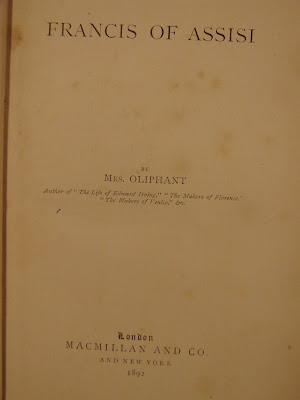 But it's not a funny pseudonym as I had first hoped. Click the link to learn more about Mrs. Margaret Oliphant.

The other fun part about this book is the notes of provenance. Provenance, dear reader, is the history of the physical book - where it has been, who has owned it, etc. This one had a fun little history. There's a bookseller's ticket: R. Paggi, Firenze [Florence]. Then the inscription of Bernard Harrison, Florence, 1899. Then it was picked up by Franklin P. Waller, Paris, 1934 and boasts his rather attractive bookplate. And then somehow it got to Stillwater, MN. It is possible we bought it in England or Wales, but no one put his signature in it since 1934. 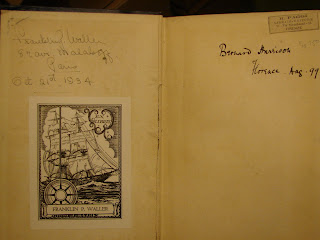 Therefore, friends, sign your books. Not only does it help to prevent acquaintances from permanently borrowing them, but it gives folks 100 years from now a little glimpse into the life of the books they come across.

Share
Posted by Andrew Poole at 5:24 PM No comments: 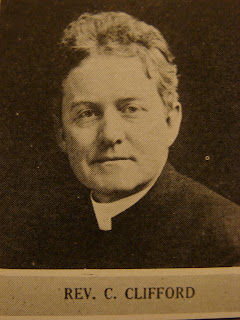 I was working on a collection of 8 letters to a Rev. Cornelius Clifford, 4 of which were written by George Tyrrell, the "Catholic modernist". In one of the letters (this one by a Rev. Joseph Keating, S.J.), Clifford was referred to as "the American Tyrrell"! - this apparently in reference to some writing of his (and the comment was meant as a compliment). I had never before heard of Clifford, so I sought to find out a bit more about him.

Some facts: born in New York City 1859, died 1938. Studied at Fordham, Innsbruck, Louvain. Entered the Society of Jesus in 1879: left with permission in 1899. Was ordained only a year before, in 1898. Taught at Georgetown; Merriam Park, St. Paul, MN; Seton Hall; Columbia. Wrote a few things. We have three copies of one of his books (and, sure enough, one is signed): Introibo. A Series of Detached Readings on the Entrance Versicles of the Ecclesiastical Year. He wrote the article on St. Athanasius in the Catholic Encyclopedia. Apart from some other minor facts, that's about it.

Sources: The 8 letters mentioned above; The American Catholic Who's Who, 1938 and 1939 (Detroit: Walter Romig); The Catholic Encyclopedia and Its Makers (New York: The Encyclopedia Press, 1917); and apparently Clifford is not so notable as to have made it into our own Dr. Thomas Loome's doctoral dissertation: Liberal Catholicism, Reform Catholicism, Modernism. A Contribution to a New Orientation in Modernist Research ("Tuebinger theologische Studien, Bd. 14". Mainz: Matthias-Gruenewald-Verlag, 1979).
Share
Posted by Andrew Poole at 6:10 PM No comments: 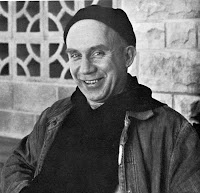 There's a little joke here at the store that Thomas Merton is sort of like Elvis or Jerry Garcia, i.e. he's not really dead. On occasion one may catch a glimpse of him. You can never be absolutely certain you saw him, but over time the evidence builds up.

I was on a bus once from Tulsa to Memphis, and somewhere in the middle of Arkansas, just outside of Little Rock, there is an old, dilapidated bus stop, which probably hasn't been in use since the 60's. It was there I had my first Merton sighting. He was sitting there on a bench, looking pensive. He was wearing an old jacket over his religious habit, and he had on a small black cap. As our bus approached, he was merely staring at the ground. But just as we passed, he looked up and smiled. I'll never forget that moment; it was like a dream. Or was it a dream?

Merton sightings always occur under similar circumstances. They often happen in the desert or in other lonely places. There are some who claim they've seen not only Merton, but also Jerry Garcia, Elvis, and Jim Morrison all together and conversing. Perhaps Merton is now the spiritual leader of an elusive band of supposedly dead celebrities?

Many years ago, while riding out West on a 1940s Indian motorcycle (in British racing green), I saw Merton peeling a potato under a sycamore tree. I pulled off the road, parked my bike and began walking up to him. With about ten feet between us, I hailed him, but then he simply vanished! The potato and knife fell to the ground. I ate the potato and kept the knife, which I intend to give back to him someday.

I know he's still out there.

An Open Letter to Father Z 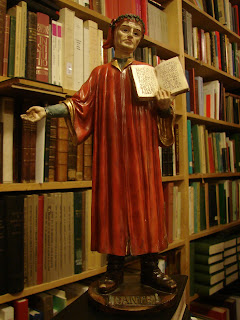 Whereas we had caught rumor of an impending visit by you to our store (aka Book Shrine), but whereas we have not yet had the pleasure of an actual visit in recent months, we hereby issue in your direction an invitatory taunt. And to render the taunt more poignant, it is hereby promulgated by the foot-high Dante statue which has resided in the Mediaeval Studies section.

Yours bookishly,
Dante & the Loomatics

Dear Misfits,
We met last Wednesday evening [June 9th!] to discuss Tolstoy’s morally compelling short novel, The Death of Ivan Ilych.  The moral agenda that drives the narrative of the story made the Misfits at the meeting question the way we ourselves have been living, and perhaps, measure our own lives against the model of “proper” versus “right” living presented in the novel.  Brotherly love, mutual support, and Christian charity emerge as the dominant moral principles of the novel.  As his agonizing death and final moments draw near, Ivan Ilych finally begins to realize the true meaning of life.  He comes to accept his death and achieves an understanding of the forgiveness necessary to die as a Christian.
This is not a novel for those who, as is common today, ask for and desire a quick death.  Misfit Tom Loome noted that in earlier times, all Catholics prayed to be spared a quick or sudden death!  He read from the second part of the pre-Vatican II Litany of the Saints which uses the cry of "Be merciful to us, spare us O Lord; Be merciful to us, graciously hear us O Lord". He then enumerated the ills from which we hope to be delivered, chief among them being a “sudden and unprovided death”.  He also noted that the modern Litany no longer includes prayers to spare us from the scourges of “plague, famine, and war”.

Conclusion:  The Death of Ivan Ilych is highly recommended; Tolstoy at his best!
Now to the books we plan to read over the next three months:
July, 2010:  A change!  We will continue our summer exploration of great short story collections by reading Dostoevsky’s The Gambler and not Notes from the Underground.  We have decided to pass on Notes from the Underground and read instead The Gambler which has a stronger narrative and story line.  The Gambler can be found in The Great Short Works of Fyodor Dostoevsky (Perennial Classics) available from Amazon for $12.47.
August, 2010:  We will pay homage to the recently deceased Ralph McInerny by reading one of  his Father Dowling detective novels, The Prudence of the Flesh.  As described by the Library Association, “Catholic priest Father Dowling is back to solve his twenty-seventh mystery. Here he works behind the scenes to help clear a former classmate, Gregory Barrett, who has since left the priesthood, of the charge of sexually abusing a child. Barrett denies the charges, but the evidence mounts against him. The history of these types of abuse allegations--and the church's response to them--is woven throughout the story. Multiple points of view move the plot along, even with the somewhat detached writing style. As always, the frame of Catholicism and parish life add interest and authenticity to the novel.”   Definitely a topical read!
September, 2010:  We now go back to Brian Moore who we read in August, 2006 (Catholics).  This time we will read his historical novel, Black Robe which describes the French attempts to colonize the wilderness that was early Canada. “The Jesuits who accompanied the French saw the Savages (as they called them) as souls to be saved. The natives saw the Black Robes (as they called them) as destroyers, threatening the gods and sorceries by which their lives were ordered. Out of that conflict between two cultures, two worlds, Moore has fashioned an extraordinary novel.”
So, that should keep us busy reading the great books of our Catholic literary tradition through the summer and into the early fall.
Warmest regards,
Misfit Buzz

Share |
Posted by Christopher Hagen at 11:26 AM No comments: