Our Catholic Men's Reading Group is entering its second decade of reading the great books of the Catholic literary tradition. It is hard to believe that we had our first meeting ten years ago in September, 2002.  ...What an adventure it has been. And remarkably, the best is yet to come! We still have so many great books to read. The challenge is finding the time. What surprises me is how many of you busy people still find the time to read our books and come to our meeting each month.


So on to the future. We will open our next decade of reading with The Time Before You Die: A Novel of the Reformation by Lucy Beckett. As you will recall, we read and immensely enjoyed her novel, A Postcard from the Volcano in February. Many of you have recommended we read this second novel and some have already started it. 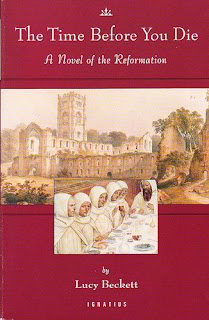 The novel is set in the sixteenth century when medieval Christendom was split into the sovereign states of modern Europe in the aftermath of the Reformation. This was particularly destructive in Tudor England where monks and nuns were persecuted amidst the dissolution of the monasteries under Henry VIII. The hero of the novel is Robert Fletcher, the Carthusian priest of the dismantled priory of Mount Grace in Yorkshire.


Beckett tells the story of this strong, vulnerable man along with the story of one of the most interesting men in the whole of English history, Reginald Pole, a nobleman, scholar and theologian who was exiled in Italy for twenty years. Pole was a Cardinal and papal legate at the Council of Trent. As Archbishop of Canterbury, Pole joined with his cousin Queen Mary Tudor, in an ill-fated attempt to renew Catholic England.  In the tragic last months of his life, Pole befriends Robert Fletcher, who has been condemned as a heretic.


Beckett does a masterful job of depicting the history of this tragic period which martyred Carthusian monks along with other martyrs of the Faith.


There is good news and bad news. First the bad news--the novel is no longer published which is a shame. Now the good news--The Time Before You Die  is widely available on-line as a used book. Most are reasonably priced. …


"I have always imagined that Paradise is a kind of library."