Relocating the Largest Theological Bookstore in the World to a nearby Family Farm Required Negotiations with Town Officials, and More Than 100 Minivan and Trailer Loads

In early 2012 when Christopher Hagen, proprietor of Loome Theological Booksellers of Stillwater, MN, decided to relocate the bookstore, he had no conception of the obstacles he would face in accomplishing the move.  After finding the perfect new location on a farm in West Lakeland Township, Hagen soon discovered that the town code prohibited operating a business of the scale of Loome Booksellers from the farm site.  In addition, Hagen faced the seemly insurmountable task of moving the largest theological bookstore in the world, consisting of nearly 100,000 books, while keeping the doors open and filling internet orders.  Undaunted, Hagen plunged into negotiations with town officials to get the code changed, while his employees began to dismantle and pack up the bookstore from its original location in a vertically challenging 100-year-old church building.  From September through December Hagen attended meetings with town officials regarding the change in town code while supervising the bookstore move.  Finally, Hagen got a green light from the town officials and an approved revision to the town code shortly before Thanksgiving, just in time to open for business on the farm.  Now he is putting the finishing touches on the new Loome Theological Booksellers farm location just in time for the Grand Opening Celebration on April 26 and 27. 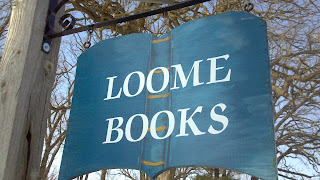 Christopher and his wife, Christelle, dreamed for 15 years of running a bookstore together and living on a farm with their 5 children.  In the winter of 2012 they decided to fulfill that dream by aiming for something they’d never heard of before: a bookstore combined with a family farm.  However, there were two obstacles to fulfilling their dream; they didn’t have a farm and Christopher owned a bookstore with nearly 100,000 volumes, a daunting amount to consider moving.  Since the early 1980s the bookstore was in the landmark 100 year old Swedish Covenant church building near downtown Stillwater, MN.  Packed with books and bookcases lining the walls, stairwells, and balconies, the store was a destination for spiritual bibliophiles from all over the world, many making annual “pilgrimages” to buy books.  How could Christopher move out of that location with only a handful of employees while keeping the internet orders, the primary revenue stream, open and working efficiently?  “When first deciding to move the bookstore,” Christopher says “I didn’t have a clue as to how we would actually move it.  I just decided it had to be done”.  First, however, they needed a farm to move the bookstore to.

“Thanks be to God,” Christopher says “my wife, Christelle, loves to comb craigslist for houses!  We had set a deadline of June 30th, 2012 for finding a farm.  On June 30th my wife spotted a craigslist ad for the farm we now live on.”  The farm location was better than the Hagens thought possible.  Not only did it have a beautiful restored farm house, but it also had a shed large enough to hold all the books with an already finished portion as ideal retail bookstore space.  Also on the property was a separate building suitable for hosting speaking events and reading groups, a long term desire for the bookstore.  To top it off there was enough field acreage to begin their adventures in family farming.  There was only one significant catch.  The property was in West Lakeland Township, MN which had a home occupation code that allowed a home based business to have only one employee on-site.  There were 3 full-time and 3 part-time employees at the bookstore.

“I decided to appeal to the town board to allow all my employees to work from the farm location since they are what make this business great and the farm was big enough that I couldn’t use it effectively without them,” Christopher says.  During the first meeting with the town board, the board indicated that they were willing to try and make changes so that the bookstore could continue at the farm with all the employees.  It took three more monthly meetings before the revisions to the town code became law, just in time for Hagen to open for business at the farm Thanksgiving 2012.  “I was so pleased to see local government do what it could to help my family live and work on a farm together and also keep all my employees together,” says Chris “I’m very grateful”.

Moving the bookstore was physically daunting, somewhat dangerous, and very long.  For four months, sawing and pulling apart bookcases, packing thousands of books, loading the moving minivan and trailer in rain, snow, and ice was routine for the bookstore.  “I couldn’t have done it without my ingenious, efficient, and dedicated employees,” said Hagen, “many volunteers helped as well.  There was great goodwill from unexpected places during the move.  I can’t believe we did it”.

The last load from the old location arrived at the farm the Friday before Christmas.  During the winter the bookstore has continued to build bookcases and unpack books at its new location at 2270 Neal Ave. N.  Now, to celebrate the relocation and successful move, Loome Theological Booksellers is holding a two-day Grand Opening celebration on Friday and Saturday April 26 and 27.  All books will be on sale at 20% off.  On Friday evening customers may attend a talk entitled “The Family Farm and the Restoration of Society” and on Saturday morning attend a talk on England’s famous convert, John Henry Newman, entitled “Newman’s Quest for a Real Spiritual Life”.  Visit www.LoomeBooks.com for more information.  There will also be refreshments and tours. 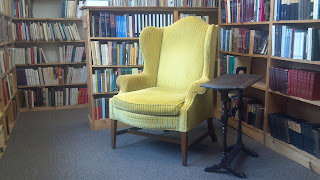 Loome Theological Booksellers was founded in 1981 to provide discerning readers with good hard-to-find or out-of-print books in the Christian theological and intellectual tradition.  Visitors come from all over North America and Europe to browse the largest selection of theological books found in one place.  Thousands of books are purchasable online through www.LoomeBooks.com